Here Comes A Flying Jatt... Straight into your Living Room on 22nd October 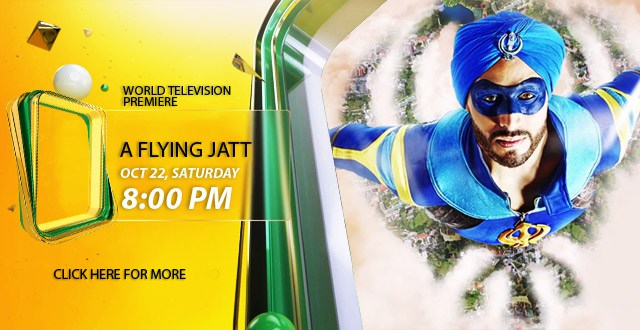 Weekends are for chores and movies, at least in my home. If we don’t watch a movie, we feel we are still in the work mode. However, best weekends are those in which a recent release is playing on the TV. It saves the labor of switching channels to find a flick. You see, we are very picky. We want humor, action, songs, romance and drama in a movie. In simple words, we love Bollywood Masala Movies. When I heard that A Flying Jatt is premiering on Zee Cinema on 22nd October, 2016 at 8PM, I got excited. What fun it would be to watch a Desi Superhero in action! I am all set for it and here are some of the reasons why you wouldn’t want to miss this movie -

India’s first flying superhero – A Flying Jatt saves the day in the coolest way. Bestowed not only with this incredible superpower our man can also display some jaw-dropping martial art moves. Tiger Shroff is killer in this movie. Haven’t you seen the trailer?
This Superhero has a Supermom
Most of the superheroes that we know pledge to save the world and have lost their parents to an accident. But this superhero has a supermom who constantly reminds him of his duties. A typical Indian mother, she scolds him every time his reluctant to use his superpowers. She definitely is a supermom! Watch this movie for Supermom-Superhero combination!
Powers + Killer dance moves = Legendary Superhero
You might be Superman or Batman but one thing our flying Jatt wins at is killer dance moves. Saving the world and burning the dance floor all in one - WOW! Now that is what they call a superhero. Let’s shake our booty on the beat with this superhero. I love this song, it’s so peppy.
The youngest Superhero
Hrithik Roshan and Shah Rukh Khan also had special powers in movies like Krrish and Ra.One respectively. But what sets Tiger Shroff apart is his age. At 26, he bagged a superhero movie as his third film while the others have had a longer run in films before had a long career preceding their superhero ventures. His kickass action and dance moves make him super hot.
Jatt Fly Karda
As the name suggests, Flying Jatt is all about a superhero who not only goes all out to save his city, but also believes in his prime religious duty of helping mankind. He is the first superhero who has incorporated his human and religious sensibilities in saving his city.
Accidental superhero
Our very own superhero was not born with these powers but became a superhero by accident. A superhero at heart and one who is courageous enough to fight despite being scared is what makes an ordinary man a true superhero.
Do your chores before you catch the ‘chors’
This is the best part - being a dutiful beta. He is no ordinary superhero because at home, he has to do all the chores like any other child. From lending a helping hand in cleaning the house or buying vegetables, this superhero has to do it all. He might be a superhero for the world but at home, you have to do what your mother asks you to do.
A hero with a consciousness:
We all have to give back to our society and the Flying Jatt definitely believes in this.  A protector of mother nature and a condemner of pollution, this superhero does all to protect the environment. A great cause for the 21st century. Isn’t it!
A child at heart:
He might have a serious job at hand but he is a child at heart. One quality that is totally endearing. This is what sets him apart making him a fun, relatable superhero. He has the superpowers but he also has a child in him who will touch your hearts.
He is coming to meet you soon
This superhero has no airs about having special powers and is very down to earth and humble. So, he has decided to meet you and save his beloved city of Amritsar with the World Television Premiere of his film, A Flying Jatt on 22nd October 2016 at 8PM.
Don’t forget to tune into Zee Cinema. Enjoy this movie with popcorn, friends and family!