By Saru Singhal - May 01, 2016
I am not possessive-dramatic-psycho, but when it comes to men in my life, I can smell a fish swimming merrily 1000 miles inside the Atlantic. I unearthed this side of me on a CTU bus when I was a little girl. I was coming back from Chandigarh with my dad. The bus was crowded. My dad fitted me on a seat with another family - one girl, two boys, and their fat mother. I squeezed in and made a tiny space for myself in the pea-pod. Like a hero, my dad stood and smiled. His princess rode with the general public. Daddy was proud of his courteous and down-to-earth girl. I sang ‘Ringa-Ringa-Roses’ in my head and dreamt about the 5-star chocolate he promised me. It went like a middle-class fairy tale till Zirakpur. Then, a life altering event changed the dynamics of my family.

Some idiots got off, few seats became available and daddy, my very own daddy, sat next to slim-trim-sleeveless-wearing-hottie. Devastated, short-of-breath, wide-eyed... and, tiny drops of tears later, I braced myself. I had a bigger responsibility. I had to break the news to my mother - your husband sat next to another woman. How could he do this to her? He broke the eternal vows of marriage. He indulged in adultery in front of his daughter. He smiled. I pouted my lower lip out. It was a bumpy ride with many accidental shoulder and leg brushings. Highway 22 was leading to a broken marriage.

I was restless. There was nothing I could do. I peeked now and then to witness the growing intimacy between my father and Miss-Flicking-Hair. I held on the handrail and got up to measure the distance between their ankles. I made a mental note - whenever daddy would ask me how much I love him, instead of expanding my arms in Shahrukh style, I would make a tiny pinch with my adorable fingers and tell him - This tiny much, daddy! I wanted to give him a slice of his own behavior. While I was doing the investigation, that fat mother pushed me little further on the seat and made herself comfy. Now, my socks covered legs were dangling and cute little bum was on the edge of the bus seat. That made me very angry! I pushed myself inside and rested on her cushiony tummy.

We reached Ambala. I didn’t say a word. I planned to break my silence in front of my mother. I kept rehearsing a few sentences in my head.

‘Daddy doesn’t love you, mommy. He sat with aunty in the bus.’ - Better to take the hotness factor out, but it still hurt.

‘Daddy is not a good person.’ was the one I finally settled in.

I got up, hugged my mother and then, expanded my arms wider and wider and consoled her - ‘I love you this much, mummy.’ Later, chin up, I gave my father the ‘Mother-of-all-Stares.’

But I had to share it with someone. It was too heavy a burden for a Kindergarten girl. I went to school on Monday and narrated the story to my best friend. She didn’t say anything. She just opened her mouth wider and wider, placed her turmeric stained fingers on it... A big ‘Hawww’ followed later. Oh God, that ‘Hawww’ killed me!

A few weeks later, I took revenge. My friend’s father gave lift to our teacher, Ms. Singh. He told my friend to stand in front of their Priya Scooter as sleeveless wearing Ms. Singh sat behind. She held her purse and my friend’s schoolbag in one hand, and put the other hand on her dad’s shoulder. My friend could do nothing. But, I did something. I opened my mouth, placed my cute little hands on it... but a silent ‘Hawww’ came first in my case. 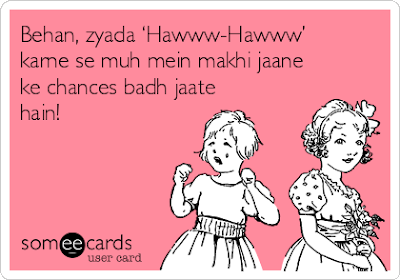 P. S.  It’s not a work of fiction, but exaggeration.