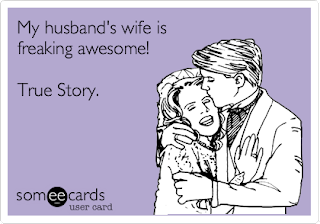 Every love story has a hero. By the popular Bollywood definition -


He fights 10 men
Dances like a pro
And, sings whenever need be


Even I have a hero in my story, but he is a little unconventional.


He fights, but with his lady love
He dances like a Pro-Robot
And boy, oh boy - when he sings the entire world comes crashing down!


We are not lovebirds. We are husband and wife, and to fill the eligibility criteria - we fight on regular basis. In our story - savior is #LoveAndLaughter. Laughter first and love later. One fine day as I was getting ready for a party, Alok started blaming me for wasting time. Apparently, I shouldn’t comb my hair, I should go out in just-out-of-bed look. I protested. I put my foot down and took more than the required time to compensate my anger. He fretted, and walked up and down the length of the living room. I am sure he must have burned a hell lot of calories in those 20-minute brisk walk. The moment I came out of the bathroom, he said - I was looking worse than before, and added fuel to the fire. I didn’t reply, which was a sure shot signal that his words have done the damage.


After realising his mistake, he started praising me - complimented my dress and hair. He even lied and said, ‘I lost weight.’ I didn’t budge. He didn’t hit my pride. He made fun of my looks after I spent 20 minutes ironing my hair poker straight. We all know how hard that is, right? We went to the party and I maintained a ‘need to know basis' relationship. He talked unnecessarily to make up for his mistake and I answered in monosyllables. Words were useless. He realised he should do something very irritating in an attempt to get me to speak. And, he started singing.


The song he sang had lyrics of 4 songs rolled into one and tune of Vande Mataram. When the music lover in me couldn’t bear the torture, I asked him to atleast know the lyrics. ‘Ok, I will sing my favorite song!’ he retorted. What followed next made me laugh my heart out. First, he didn’t remember his “favorite song.” He asked me and later gave me all the necessary clues to solve the mystery called - ‘Guess His Favorite Song.’ In simple words, he did this -

Alok wanted to listen to this Shahrukh Khan song with not-so-famous actress. When I couldn't guess it, he acted the...
Posted by Saru Singhal on Tuesday, June 3, 2014

He imitated Shahrukh Khan for a Suniel Shetty song. He was dead sure Akshay Khanna was the main lead of Mohra. I laughed through his comic journey and finally said - ‘You don’t know anything, Alok’ To which his reply was - I know how to make you laugh. And with that my anger melted like butter on a hot paratha. We both laughed at his Bollywood GK (or lack of it.) And, in the evening watched Mohra to celebrate the patch up.


Whenever our relationship hits a snag, humor spices it up. Our story may have bumps, but like a true Bollywood hero, laughter makes things right in the end. Have a look at this video - there are many more like us who make their relationship blissful with a hearty laugh.


Few months later when he was annoyed with me, I took the same course - I sang and danced, but I knew the lyrics.

*****
This post is a part of #LoveAndLaughter activity at BlogAdda in association with Caratlane.