It is a school where we get our first lessons of life. School imbibes not only the textbook knowledge, but also acts as a foundation that helps us build a strong personality. I’ve picked up a lot of good habits from school - washing hands before eating was mandatory is my prep school, and till junior school I learned many such habits. Sadly, not everyone is as lucky as I was. I went to a good public school. A large population of our country goes to Government schools where the facilities are in a deplorable state. Forget about a good toilet facility, many don’t have proper classrooms with desks or benches, all of these have resulted in high dropout rates in the past. Have a look at these statistics about government schools in our nation's capital -
We all know the importance of education to build a nation. A close look at our school system and reasons for high absenteeism raised many issues - top being lack of infrastructure. There are no benches in the classroom, drinking water, playground where children could have fun, and I read a long back there was a girl who dropped out of school because there was no toilet. This reflects the gravity of the situation. Besides a nudge to children to embrace education, we need a ‘proper school’ with all the basic amenities, where children would look forward to go every morning. With these thoughts in mind many programs have been introduced in the last couple of decades. Mid-day meal by our government is such an initiative. But as drive as big as overhauling our education system could not be executed by only one agency for lack of funds. Hence, many NGOs have come forward to support this great cause to build a strong foundation.


#SupportMySchool with Mission 1000, has pledged to revive and build 1000 schools in our country on the lines of infrastructure - proper drinking water, toilet facilities for students, and aid government run schools with the help of corporations. This program run by Coca-Cola India, NDTV, along with other NGOS aims at -

#SupportMySchool is a part of WASH initiative about which I wrote a few months back. Water, Sanitation and Hygiene program has the same ideology as that of Swachh Bharat Abhiyan proposed by our Prime Minister. These programs with same goal combined together have accelerated growth in our country in recent times. 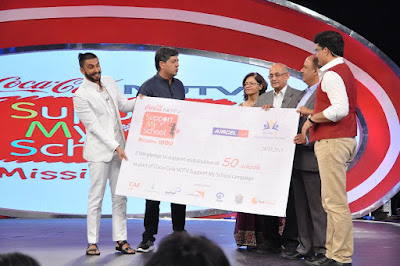 
You can be a part of this program - join and donate here.
Articles BSR