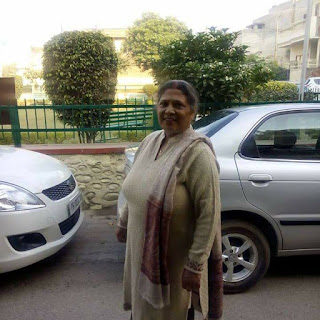 I’ve met a great number of inspiring people in my life - successful businessman, sports stars, models, writers and actors. All of them were extremely humble, generous and confident. However, there is one person who has left an indelible impression on me. She is the most soft spoken, poised, intelligent and wise human being I know. She is my mother-in-law’s friend - Harjit Kaur.

When I met her and had a one-to-one conversation, she told me about her husband who was paralyzed while dealing with chemicals in the laboratory. She took him to Delhi and stayed there for six months constantly working on his well being. I know, every wife does this, but her resolute and courage is mixed with a wave of positivity. No, she doesn’t portray it. She is positive from within. Words like pity and misery take a backseat in her dictionary. She redefines grace. From her, I’ve learned not only to face problems with courage, but also to embrace everything with a smile. A rare quality which is often penned in books. Many would stop at this point - they deal with a problem and move on. She doesn’t. She learns from it and shares her learnings with everyone. And, she is not preachy while doing so - a quality I absolutely adore.

Like every wise person, she exuberates positive vibes. There was a time when things were unsavory and in just one conversation, she gave me a gentle nudge towards the sunny side. First she admired me for the good things I was doing and applauded my spirit. Then she made me realize my inner strengths and how I was just a step away from overcoming my problems and realizing my dreams. That conversation is embedded in my memory. When you are with her, lessons are not a sermon - she brings forth your goodness and motivates you to harness it.

Her goodness doesn’t end in philosophy. I have seen her dealing with money and she is very wise in matters of money too. Once her husband donated six lacs to a Gurudwara in his native village. She was extremely graceful while dealing with it, as he donated it without discussing first. For her, wisdom is not in matters of managing money, it is the amount of happiness one derives from it. Trust me, that was the most toned down reaction I’ve seen from a wife. She is not only generous, but she reasons with other person’s feelings and respects them, and that too even in the matters of money.

This is not the end. Last year after her retirement, she learnt to operate internet and smartphone to be in touch with everybody. She is always on the lookout to learn and adapt to the modern times. She is constantly in touch with everyone on whatsapp. She sends messages to my husband every day. She even sends beautiful videos and ecards on special occasions. I wonder, would I have this passion when I will be of her age? She is a true example of aging gracefully.

Here's a snapshot of one of her messages - 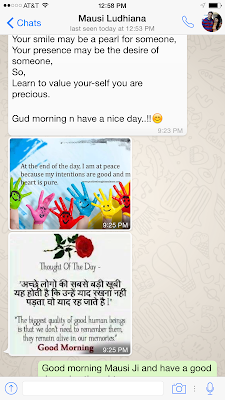 To you Aunty or Rana Mausi, as you are lovingly called - you are #MadeOfGreat. I’ve learnt the true way of life from you. I adore and respect you, and this post is a gentle ‘thank you’ from my side for being there for us.

P. S. - What do you think of Tata Motors association with Lionel Messi? Share your views and the best comment wins.