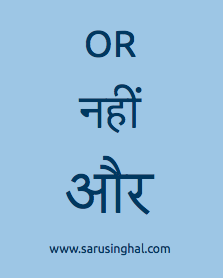 There are always two options - either give up or give in our 100%. The decision is often based on our willpower. Nothing is easy but when we march forward to break the norms of society, it’s like facing a storm head-on. We are told to leave it OR bear the consequences. We all get a little scared. I know, I was scared when I decided to commute by Haryana Roadways as I didn’t get a seat in the hostel. I was told either stay in Chandigarh OR forget about your dream college. I was told to make a compromise but I was not ready for it. I am happy, I did what I felt was right. It may seem a small decision but it has made me what I am today - Strong, Independent and Confident. This is my journey from OR to AND. Many incidents on this journey strengthened me and reaffirmed many of the things I believed in.

There were a few times when I felt miserable because of the choices I made. One summer afternoon I was the only girl in a long queue at Panchkula Bus Stand. I was there to get the monthly bus pass. With everyone staring at me, I won’t lie, I was intimidated by the male presence around. One man simply asked, ‘Papa ya Bhai nahin hai, unko bolo aane ko’. I nodded. Being the only girl, I was allowed to go first when the window opened. But what happened next shook me, not only the middle aged man at the counter spoke rudely but he said many nasty things in haryanvi. I was nearly in tears but somehow managed to request him to check my form. To my complete shock, he denied it. According to him, MCM DAV College didn’t exist. Throwing the form back at my face along with a cheap comment, he told me to get a letter from the Principal of the College, duly signed by the University officials to prove its existence, if I ever wanted the bus pass. And I did that. It took me a week but I got all the documents he asked for, dealing with many more like him. One bad episode more than a decade back taught me that I am a girl AND I can do what boys can do.

You know, when a girl steps outside her house she is told repeatedly to take care of herself. Be vigilant, watch yourself, return home early - few phrases we hear many times a day. My story was no different. Ironically, the task of taking care of yourself is on you but the task of taking care of other girls around you is of men around. I commuted for 5 years, believe me when I say that there was not even a single incident where I could say - a man came forward to protect a girl. There was one incident which made me believe for the first time - I am a girl AND I can take stand for myself and others around. It happened when I stood for one girl who was harassed by a guy for nearly a month. This boy was troubling the girl, passing cheap comments and touching her inappropriately whenever he got an opportunity. Like everyone else, even I neglected it initially. I don’t know about others, but at that age, I was too scared to get involved in a fight in a public place. I didn’t fight, but one day when he was trying to get close to her, I didn’t let him. He asked me to move but I didn’t budge. I even said to others that he teased her. It was that day I realized how strong I was and I didn’t need a man to protect me. The fear ingrained by the society is farce.

Sit quietly OR you will bear the brunt.
No! Stand up AND never let it happen again.

Girls are always bounded by many restrictions - what to do, what to wear and where to be. No wonder there are many who blame Nirbhaya for being outside late at night. Since the day I first travelled in an overloaded Haryana Roadways bus, till today, I have realized that our choices define us, never let a compromise snatch away your identity. If you secure admission in your dream college, don’t let a compromise take that away from you. Once you set the first foot towards your journey, you will discover a true self hidden deep inside. Like I discovered that I am Brave, Independent and Complete.

There were days when I sat in one corner of the bus and wondered about the easy life I would have had. It feels good to be protected and in a place where you get things without putting up a fight. But then I remember how simply someone said - “Life begins outside your comfort zone.” I am what I am today because of the choices I made, because I used AND instead of OR. 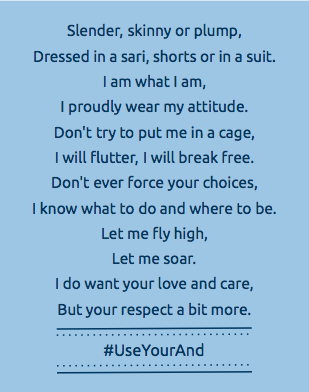