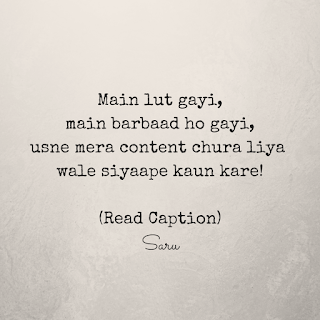 I love writing - that's an understatement. I've written in situations where normal people go mad. But because I'm already insane, I find sanity in pen and paper. Many years ago when a CA copied most of my poems on his blog, I was flabbergasted. But after ranting for 2 hours, I was so bored, I gave up on him. I have to say it again - he was dumb. He copied the title of one poem and text of another to compile a blog post. Poem on divorce had the title of one-night stand poetry. Forget plagiarism, I was offended ki meri protagonist ko usne characterless bana diya.

Then a Delhi based publishing house did it. The guy abused me for pointing out his folly. Blogger this, blogger that - he sang for a week. He was in Delhi, I was in New York. He was so desperately miserable to save his face, I wanted to hold a candle march for him at Times Square with a placard - Shanti de bhagawan aapko. The icing on the cake was when the casting director of one of the biggest production houses in India used my couplet and garnered compliments. The good folks who read my work posted comments on her picture tagging me. She apologised and gave credit only to delete the picture later and used the same couplet after a month or 2. How cute! Par chhdo yaddasht gum hona Bollywood ki favourite bimari hai.

Then who can forget the girl who cried wolf last year? She and her friends spammed by timeline and accused me of plagiarism. When I showed them that the post was originally written by me, they spammed me again. Reason - they wanted me to publicly name her and give her free publicity. I'm nice, not stupid - duh! Though I wanted to ask her, when I plagiarised your content, you were a victim. When you plagiarised my content, you were a victim. Kaunsa math tha yeh? BTW, who was I? By God, mujhe aaj tak identity crises hai.

Now, what's the moral of the story? The moral, ladies, gentlemen and copycats, is to use plagiarists and their act of plagiarism to create more content. Because when you love writing nothing else matters. Also, main lut gayi, main barbaad ho gayi, usne mera content chura liya wale siyaape kaun kare.